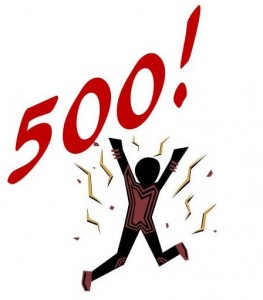 I had planned a big celebration in honor of this occasion, including the release of another short story, but the sales happened so quickly, I didn’t have time to write as planned. Even though you guys will have to wait longer for the next story, I’m not complaining. The speedy sales are a good thing.

When I originally published Charlotte, I made up some outlandish goals. I hoped to sell 1,000 books in one year. In reality, I made it half way to my goal in approximately 90 days.

Five hundred people, the vast majority of whom I do not know, paid money to read something I wrote. It’s amazing, especially considering that most self-published books never sell more than 100 copies. In addition, Austen sequels that do not focus on Elizabeth and Darcy are not generally expected to perform well.

I’m not going to lie. Sometimes, I’ve checked my sales numbers, found them stagnant, and thought, “Well, that’s it. I’ll never sell another.” Then, when sales are going well, I think, “Wow! This is incredible. I could actually sell 1,000.”

While I may be a tad unbalanced in my thinking, I would not trade this experience for anything. It has been one of the most difficult, challenging, fun, exciting things I’ve ever done, and I would do it all again.

Facts are such horrid things!