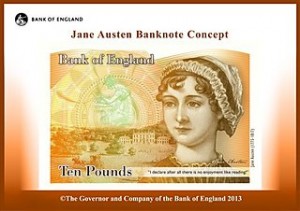 One of my literary idols will grace England’s 10-pound note, meaning that I will be able to buy a copy of Jane Austen with a Jane Austen. Or something.

According to ABC news, “Jane Austen will become the new face on England’s 10-pound notes — in an attempt to add a little pride and fight the prejudice against women on the country’s currency.

“The Bank of England chose the chronicler of 18th century English country life as the new face of the note, bowing to critics who complained that the venerable institution was ignoring women on their currency.” Read the full AP article here or here.

I can’t speak to the issue of prejudice against women, but I hope Ms. Austen would be proud to be honored in such a way.

There’s too much tendency to attribute to God the evils that man does of his own free will.

— Agatha Christie
We use cookies to ensure that we give you the best experience on our website. If you continue to use this site, we will assume that you are happy with it.OkPrivacy Policy