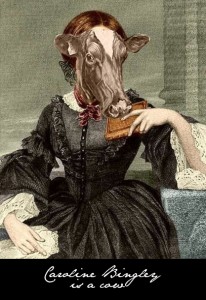 In my original blog post about my new novel Caroline Bingley, I referred to the character in question as a villainess. But upon further contemplation, I don’t think that’s true.

But a villainess? I don’t think so.

Both types of characters–antagonist and villain–serve to screw with the lives of the protagonist. Because an antagonist has an opposing agenda, their actions cause pain and vexation to the protagonist. They don’t necessarily wish to harm them, but sometimes, just by enacting their own agenda, harm comes to our beloved hero. A villain, however, is out to destroy the main character. A villain has evil in their heart and is purposefully trying to do harm. Wickedness is part of their core. They twirl their Snidely Whiplash mustaches with glee as they work toward the destruction of the protagonist.

I know there are several P&P sequels out there that portray Caroline as a villain, but I’m not so sure that’s what Jane Austen intended for her character. In fact, Caroline and Elizabeth Bennet have many similarities; they are smart, bold, and cunning. They both exercise their wit against each other in private. Only Elizabeth carries off those traits in a much more positive light. And what brings them to conflict is their mutual desire for Mr. Darcy and their mutual–but opposing–interest in the relationship between Bingley and Jane.

Elizabeth isn’t out to win Mr. Darcy, but Caroline certainly is. And upon perceiving Mr. Darcy’s interest in Elizabeth, Caroline ups her game, resulting in a whole lot of childish put-downs and insults. She sees what’s happening, but she doesn’t have the social skills and wherewithal to turn the situation in her favor. They are in conflict, and Caroline says and does some nasty things, but she does so out of her desire for Darcy, not out of her evil desire to destroy Elizabeth.

Both Caroline and Elizabeth try to work behind the scenes to either help or hinder Bingley and Jane. They both enact cunning plans, with varying degrees of success. Caroline and Darcy find a pretence for removing Mr. Bingley to London and away from Jane, and Elizabeth finds one to send Jane right back into his circle by getting her sister to Town. They both did the same thing and for the same reason: to get their way in regard to their sibling’s future happiness.

So yeah, as I work on Caroline Bingley, I realize that what makes the Caroline/Elizabeth relationship so interesting–and what makes Caroline so cow-like–is that they are similar characters with opposing agendas. Elizabeth is clearly the more mature, well-rounded, worthy character, and Caroline is immature, unkind, and mean-spirited.

And I confess, I’m having a lot of fun writing her.

What does that say about me?

One thought on “Is Caroline Bingley a Villainess?”