Last week, my friend Mary Simonsen sent me an article from FT.com about a  show at the Metropolitan Museum of Art in New York called Rooms with a View: “The show covers a brief period and a slender subject: the open window, as rendered by German, Danish and French artists in the first half of the 19th century who embraced the theme as a multifaceted symbol of the veil between private and public life, culture and nature, domesticity and wilderness.” 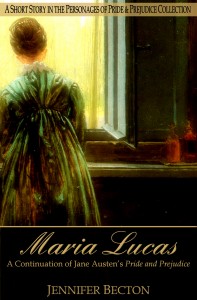 The article then goes on to feature “Woman at a Window” by Caspar David Friedrich, which just so happens to be the cover art I selected for my short story “Maria Lucas.”

And to my surprise, the author continues by making a connection between the art, its themes, and Jane Austen! She compares the figure in this painting to Marianne from Jane Austen’s Sense and Sensibility.

The article goes on to describe the open window genre and comparing its themes to other literary works, such as Wuthering Heights.

It’s worth a read, and heck, it sure makes me feel good about my art selection.

I am ready to face any challenges that might be foolish enough to face me.

— Dwight Schrute
We use cookies to ensure that we give you the best experience on our website. If you continue to use this site, we will assume that you are happy with it.OkPrivacy Policy