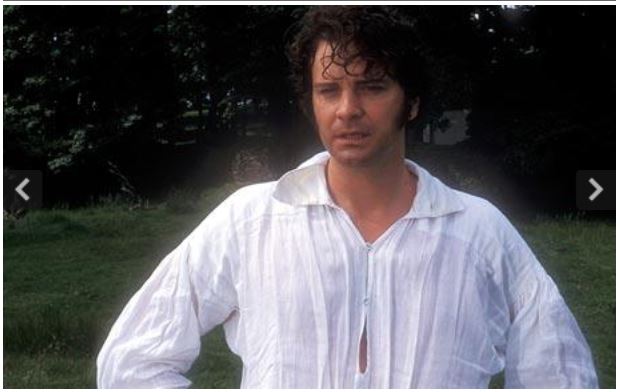 I am about to say something controversial.

I dislike this scene intensely.

The 1995 production of P&P was pretty faithful to Austen’s manuscript, with this glaring exception. I’m not contending that it was historically inaccurate for a gentleman to take a dip in the pond. It was historically appropriate. I object to the fact that it was added to an otherwise faithful movie adaptation of the novel.

And apparently this scene made Colin Firth a star, and it is the most memorable scene in the film. Gah! It didn’t even happen in the book!

And I can’t get away from it.

There’s this from Lost in Austen:

And then the scene was “immortalized as a statue“:

Not only do I think Austen wrote a better scene, but I also think Colin Firth had far more memorable moments in the film than just playing peekaboo with his nipples.

However, if a damp shirt is all it takes to bring readers to appreciate Jane Austen, well, I guess that’s good. And please, Mr. Firth, take no offense. I enjoyed you in the rest of the movie immensely.

Courage is knowing what not to fear.

— Plato
We use cookies to ensure that we give you the best experience on our website. If you continue to use this site, we will assume that you are happy with it.OkPrivacy Policy