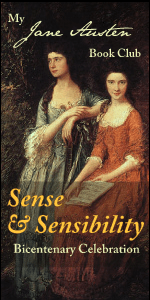 October 2011 will mark the bicentenary of the publication of Jane Austen’s Sense and Sensibility. This is why My Jane Austen Book Club wants to dedicate a special space to the celebration and discussion of Austen’s first achievement as a published writer. I have invited some expert Janeites to contribute to the discussion and they have kindly and generously accepted . Katherine at November’s Autumn and Gaskell Blog contributed the cute button on the left. Each month one of them will deal with a theme, a character, a topic somehow linked to Sense and Sensibility. The discussion will be open to you all with your comments, questions and suggestions. There will be a monthly giveaway and you will have the chance to win a book or DVD connected to our celebration. Here’s the schedule of our virtual meetings. Take notes.

If you comment on the announcement post at MJABC or/and on upcoming Jennifer Becton’s post about marriage and money in Sense and Sensibility, [which will be posted January 22], you’ll be entered in the giveaway of The Three Weissmans of Westport by Cathleen Shine. This novel, published by Picador, is a new modern re-telling of Jane Austen’s Sense and Sensibility.

Thank you, Maria Grazia of My Jane Austen Book Club for the invitation to participate. I had not read Sense and Sensibility in a few years, so it was a real pleasure to reread the text and enjoy the tale again. I look forward to reading the upcoming posts of those who are contributing after me. Those are the real experts. I’m just an Austen enthusiast who does the best she can. –Jennifer

3 thoughts on “Sense and Sensibility Bicentenary”

Joy is the core of existence, the motive power of every living being…. It is the need of one’s body as it is the goal of one’s spirit.