Before I wrote Charlotte Collins, I was–and still am–a freelance editor employed by contract by two small presses. As a freelancer, my motto has always been “feast or famine.” Either I had too much work or none at all. So if work came along during holidays, I had to take it.

This year, however, I decided to take the week of Christmas off. It feels so decandent to take time off, and so, I’ve decided to have a week of whimsy here on Skidding in Sideways. No serious talk. Just fun. 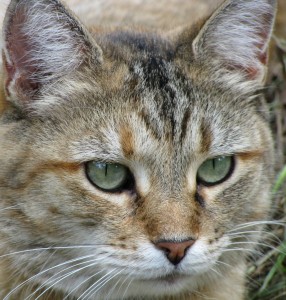 So, without further ado, allow me to introduce you to my writing partner: Puttytat.

Puttytat literally showed up on our doorstep one winter night seven years ago. She was extremely skittish–and is still terrified of most other humans–but apparently, my husband and I were deemed acceptable, and she moved herself in. Actually, she took over the household. She also played a large role in the writing of Charlotte Collins; she sat in my lap for most of its composition and made sure I remained in front of the computer through several drafts. Her self-appointed task is to keep our property varmint-free, a job that she takes very seriously. She patrols the perimeter of our yard daily, and sometimes, she leaves us gifts on the sidewalk. She has assassinated bugs, lizards, mice, moles, birds, skinks, rabbits, squirrels, chipmunks, and a bat. (Still trying to figure out how she got the bat.) She also fulfills the roles of alarm clock, court jester, and lap warmer.

I am so thankful that Puttytat decided to make us her humans.

2 thoughts on “Week of Whimsy: Meet My Cat”

Non-thinking is an act of annihilation, a wish to negate existence, an attempt to wipe out reality. But existence exists; reality is not to be wiped out, it will merely wipe out the wiper.