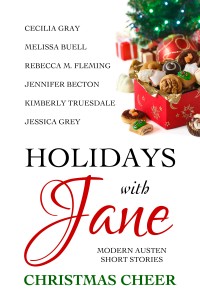 Meet the writers of Holidays with Jane: Christmas Cheer

MELISSA BUELL wrote “Mischief and Mistletoe.” She lives in Southern California with her husband and kids. She’s an English teacher by day, author by night. She loves to read, bake, and take photographs. She has been known to thrift clothes into costumes and dress up for Jane Austen parties. Check out her fantasy novel The Seventh Blessing (Tales of Gymandrol Book 1)

REBECCA M. FLEMING penned “A Tale of Three Christmases.” She is a dreamer, writer, quarterback fangirl, lover of all things Austen and the next Elven Queen of Middle Earth. A fervent believer in fairy tales and the power of Love, she often describes her purpose as “the distributor of tough love and fairy dust,” and is determined to tell all the stories. Be sure to visit her book blog!

CECILIA GRAY authored “With Love, from Emma.” She lives in the San Francisco Bay Area where she reads, writes, and breaks for food. She also pens her biographies in the third person. Like this. As if to trick you into thinking someone else wrote it because she is important. Alas, this is not the case. She reads a lot because books give her ideas of things to try—archery, lock picking, and swing dancing, among other adventures. Check out Fall For You

, the first book in her Austen Academy Series.

JESSICA GREY wrote “It’s a Wonderful Latte.” She is an author, fairytale believer, baseball lover, and recovering Star Wars fangirl. A life-long Californian, she now lives with her two children in the Rocky Mountains where she spends her time writing, complaining about snow in April, and drinking way too much caffeine. I loved Attempting Elizabeth

, which is the what Lost in Austen should have been.

KIMBERLY TRUESDALE is the author of “Pride & Presents.” She is a teacher and storyteller who has a line from The Great Gatsby tattooed on her arm and has worn out at least five copies of Anne of Green Gables. Kimberly’s first novel, My Dear Sophy, told the story of how the Admiral and Mrs. Croft from Jane Austen’s Persuasion first meet. Her second and third novels, The Wrong Woman and A Prince for Aunt Hetty, kicked off the Unexpected Love series of sweet historical romances with atypical heroines. Read her newest book A Prince for Aunt Hetty (Unexpected Love Book 2)

Click here to shop for Kindle editions of books by these great writers. Choose “Holidays with Jane Writers” in menu to see all their books!

I was honored to be invited to participate in this compilation and excited to attempt something new. This is my first modern Austen adaptation. It is also my first non-Pride and Prejudice story. And it’s the first time I wrote about two main characters instead of a minor character. “The Work of an Instant” a modern–and somewhat magical–look at Anne and Frederick from Persuasion.

When Frederick Wentworth’s ship docks at the Navy base in Charleston just in time for Christmas, Anne Elliot feels torn between desire to see her former fiancé and fear of rejection. Will taking a risk end in humiliation or give Anne a second chance with her first love? To find out, all she has to do is turn around and face him.

One thought on “Holidays with Jane: Christmas Cheer. Meet the Writers”

All great artists and thinkers are great workers, indefatigable not only in inventing, but also in rejecting, sifting, transforming, ordering.

— Friedrich Nietzsche
We use cookies to ensure that we give you the best experience on our website. If you continue to use this site, we will assume that you are happy with it.OkPrivacy Policy