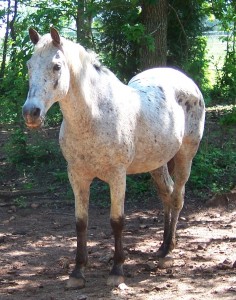 Last night, my dear friend and former dressage instructor had to make the painful decision to put to sleep her equine partner of twenty years and my favorite lesson horse Rocky, who was suffering from colic.

My friend purchased Rocky, a 14.1 hh arab appy cross, as a barrel horse, and together, they tore up some barrel courses. But he also came to her fully trick trained. Rocky could count, and he would assist weary travelers with a gentle nudge in the back to help them down the road. I think he also picked up hats, but I never saw him do it. It was said that Rocky was in a Burt Reynolds (not John Wayne–oops) movie, but no one knows which one. As a result of his trick training, in which they obviously coerced him with treats, Rocky was a little, well, assertive about taking treats. There was a special technique for hand feeding him that involved shoving the treat in his mouth before he knew what was happening.

From all that I hear, Rocky was wild and crazy during those early years, but when I knew him, he was much calmer. He was truly the first horse I bonded with, and I can honestly say that I never remember being afraid when I was riding him. He taught me to jump and canter. He, of course, was coordinated and beautiful; I had all the coordination of a newborn giraffe. But he put up with me as long as I let him use me as a post-ride scratching post.

In the pasture, Rocky was the sentinel, the self-appointed lookout and protector of the herd. My friend tells the story of the time a distant neighbor was burning some debris. The wind brought the smell of fire into the pasture, and Rocky could see the blaze on the horizon. He was concerned. He refused to come in for dinner that night; instead, he stood stock still and monitored that fire to make sure his herd would be safe. I think he was still in the same spot in the morning.

That sums up Rocky’s personality. He was protective, hard-headed, and never backed down or stopped. He never spooked at anything. Ever. He never stopped moving forward, and I always felt like I knew what he was thinking. If there was a small ditch that the other horses walked over, Rocky would leap. If there were vines in our path, Rocky would try to crash through them. If there was a bear on the trail, I have no doubt that Rocky would have faced him down. So even if he wasn’t doing what I might want him to do at an obstacle, somehow it was OK because I already knew what he was planning.

Once when my friend and I were riding in the pasture, he cantered off with me. I can’t say it was his fault. Right before he struck off, I remember thinking, “It would be so awesome to canter right now.” In lessons, my friend had always told me to “think canter” and Rocky would canter; that was the first time it ever worked, I guess.

My horse Darcy also had a special fondness for Rocky. Well, I’m not sure fondness is the word, but she did appreciate his protectiveness of her. Every morning, Darcy wanted to be first at the gate for breakfast, and apparently, Rocky would make a half-circle around her to keep the other horses back until she went in. She had him wrapped around her hoofer.

Even though he didn’t start out as the ideal lesson horse, Rocky taught hundreds of people–kids and adults–to ride. He taught them to jump, canter, and use their helmets as battering rams when he would rush through tree limbs on the trail. Rocky will always live in my memory as my favorite lesson horse, and I will miss him.

5 thoughts on “In Memoriam Rocky”

A failure is not always a mistake, it may simply be the best one can do under the circumstances. The real mistake is to stop trying.