This post was originally written for and posted at Yamina Today. I’m reposting it here in the hopes that it might help you in your self-publishing journey.

What is the secret to self-publishing success? How did writers like Amanda Hocking and John Locke come from nowhere and become USA Today and/or New York Times best-selling authors? 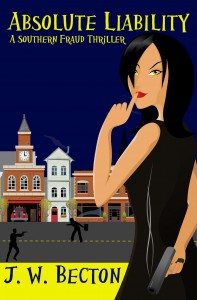 With the launch of Absolute Liability (Southern Fraud book 1), I’ve been fortunate enough to experience a bit of success by landing in the Amazon Kindle Top 100, and since I began self-publishing in September 2010, I’ve sold more than 28,500 books. Though I’m nowhere near the league of Hocking or Locke, people still ask me how did I it. What’s the secret?

The secret is that there is no secret.

I’ll tell you exactly what I did, how much money I spent, and how many books I sold. Will replicating my process gain you the same result? I have no idea because there will always be an element of luck involved. If there were a formula for publishing success, every book would be a best seller, and that’s just not the case.

The launch of Absolute Liability peaked at a rank of 430 on the Amazon Kindle list. After that, the book slowly began to build momentum and landed in the top 100. If you’d like to read a breakdown of weekly sales numbers, please visit my blog.

I hope you can use some facet of my experience to help your books, but there’s just no guarantee that replicating what I’ve done will work. It may not even work for me next time. Also, a great deal depends on your precise market. What may work for a thriller may not work for historical fiction, and a book in a niche genre may not have an audience big enough to hit overall best-sellers lists and may warrant a completely different strategy.

If I could boil it down to a three bullet points, I’d say these are the most critical factors to success:

I’d love to hear what has worked for you and what hasn’t. What have you done to share your books with a wider audience?

2 thoughts on “There Is No Secret”

— Horace Walpole
We use cookies to ensure that we give you the best experience on our website. If you continue to use this site, we will assume that you are happy with it.OkPrivacy Policy