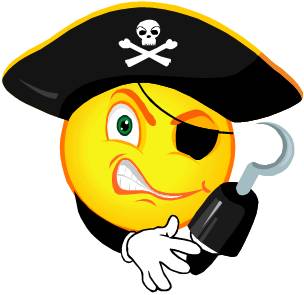 Many authors freak out about ebook piracy. They seem to have learned nothing from the digital music world. Nope, these authors spend time scouring the web for pirated copies of their books and demand that they be removed from these evil websites. Then, they see the download count, whip out their calculators, and figure out how much money they have “lost.”

The main problem with this logic is that a simple fact about human nature is ignored:

People will take for free something they would never pay for.

That’s why Kindle giveaways work so well. People will take for free something they wouldn’t pay for, and this exposes them to a book that they wouldn’t ever have tried. A giveaway is not necessarily a “lost sale.” It is, however, free marketing.

Another problem is that there have been no scientific studies to prove that piracy is evil. Most anecdotal evidence supports the idea that piracy either

JA Korath actually experimented by pirating his own books. According to that article, his Amazon sales of the same book (at the original price) improved by 600 percent over the same time period. Here are another his articles about the subject.

“BitTorrent users are 170% more likely to have paid for digital music in the past six months and are 8x more likely to have a music streaming account when compared to the average Internet user.” And there is no reason to assume that figures for ebooks would look any different – meaning that what is reputedly one of the world’s foremost platforms for online piracy is apparently facilitating legitimate paid-for consumption of creative works.” Read more here.

While these studies are not scientific, they merit consideration.

Do you freak out over piracy? Or do you appreciate the free marketing?

Oh! It is only a novel!… In short, only some work in which the greatest powers of the mind are displayed, in which the most thorough knowledge of human nature, the happiest delineation of its varieties, the liveliest effusions of wit and humor, are conveyed to the world in the best-chosen language.