Not everyone likes every book or becomes a fan of every author. Although many modern Janeites find it unbelievable, many people, including some famous authors, did not care for Austen or her writing.

Anything like warmth or enthusiasm, anything energetic, poignant, heartfelt, is utterly out of place in commending these works: all such demonstrations the authoress would have met with a well-bred sneer, would have calmly scorned as outré or extravagant. She does her business of delineating the surface of the lives of genteel English people curiously well. There is a Chinese fidelity, a miniature delicacy, in the painting. She ruffles her reader by nothing vehement, disturbs him with nothing profound. The passions are perfectly unknown to her: she rejects even a speaking acquaintance with that stormy sisterhood … What sees keenly, speaks aptly, moves flexibly, it suits her to study: but what throbs fast and full, though hidden, what the blood rushes through, what is the unseen seat of life and the sentient target of death–this Miss Austen ignores….Jane Austen was a complete and most sensible lady, but a very incomplete and rather insensible (not senseless woman), if this is heresy–I cannot help it.

I disagree with Bronte. Austen had a clear understanding of the darkness that existed in her world, but her decisions about how to address these passions and deeds in her writing diverged from Bronte’s choices. Bronte saw life as tragedy and Austen saw it as comedy, but they were both looking out on the same world.

Mark Twain also had quite a great deal to say on her writing: 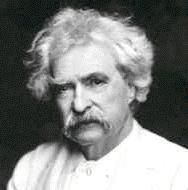 Jane Austen? Why I go so far as to say that any library is a good library that does not contain a volume by Jane Austen. Even if it contains no other book.
–quoted in Remembered Yesterdays, Robert Underwood Johnson

To me his prose is unreadable — like Jane Austin’s [sic]. No there is a difference. I could read his prose on salary, but not Jane’s. Jane is entirely impossible. It seems a great pity that they allowed her to die a natural death.
–Letter to W. D. Howells, 18 January 1909

Jane Austen’s books, too, are absent from this library. Just that one omission alone would make a fairly good library out of a library that hadn’t a book in it.
—Following the Equator

I haven’t any right to criticise books, and I don’t do it except when I hate them. I often want to criticise Jane Austen, but her books madden me so that I can’t conceal my frenzy from the reader; and therefore I have to stop every time I begin. Everytime I read ‘Pride and Prejudice’ I want to dig her up and beat her over the skull with her own shin-bone.
–Letter to Joseph Twichell, 13 September 1898

Harsh. He was obviously not a fan. How might Austen respond to such criticism? Well, here she writes in response to a critic (Mr. W.) in a letter to Fanny on March 23, 1817:

I am very much obliged to you, my dearest Fanny, for sending me Mr. W.’s conversation; I had great amusement in reading it, and I hope I am not affronted, and do not think the worse of him for having a brain so very different from mine…. Do not oblige him to read any more. Have mercy on him, tell him the truth, and make him an apology. He and I should not in the least agree, of course, in our ideas of novels and heroines. Pictures of perfection, as you know, make me sick and wicked; but there is some very good sense in what he says, and I particularly respect him for wishing to think well of all young ladies; it shows an amiable and a delicate mind. And he deserves better treatment than to be obliged to read any more of my works.

I find it interesting to read the criticism of Austen’s writing; it is instructive, and it also helps me solidify my view on her compositions. I also like her response: If you don’t like it, don’t continue to read it.

Well, Ms. Austen, I like it, and I’ll keep reading it.

— Thomas Jefferson
We use cookies to ensure that we give you the best experience on our website. If you continue to use this site, we will assume that you are happy with it.OkPrivacy Policy