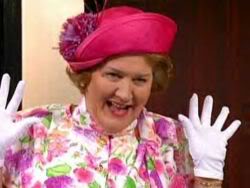 Today, I am writing this blog post at Starbucks. Ahhh! Hazelnut Latte! Delicious, but I have always felt a little strange about dragging out a laptop and writing in such a public forum, and I still do, I suppose. (I wouldn’t be here if I had internet in my weekend location.) When writing in public, I’ve always felt a bit like Hyacinth Bucket—that’s pronounced boo-kay—in the episode of Keeping up Appearances in which she insists that Richard, her longsuffering husband, drive her around town with a pair of snow skis strapped to the roof of their car.

Hyacinth doesn’t snow ski. Neither does Richard. And they have no intentions of doing so. Ever.

But Hyacinth believes that snow skiing is an activity done by those of a different—and higher—social class, one she has always hoped to join. She spends every molecule of her energy attempting to give the appearance that she is something other than what she truly is. She plans society events such as lavish candlelight suppers and riverside dining with riparian entertainments, and she forces her husband to join her in the hopes that someone will see how truly worthy she is to be accepted.

If I ever considered writing in public, I felt a bit like Hyacinth Bucket. I was driving around with skis on my car. Look at me! I am writing. I might have given the appearance of a writer, but I had never joined the ranks of the published. I had never truly been accepted into that upper echelon of literary society. In fact, I had been rejected as if I were Hyacinth herself!

Self-publishing has given writers the option of bypassing this vaunted and—more often than not—discouraging and insulting facet of bringing a book to market. No longer do writers have to feel the same desperation as Hyacinth Bucket about accomplishing their goal. If I write at Starbucks, I no longer have to feel as if I’m trying to give an appearance of being something I’m not. I am a writer.

On July 15, I plan to release Caroline Bingley, my second continuation of Jane Austen’s Pride and Prejudice. To a certain extent, I have begun to see Caroline in a bit of the same light as I see Hyacinth. Caroline was wealthy, to be sure, and she traveled with the upper-class Mr. Darcy, but the truth of the matter is that her fortune was earned in trade: a deep humiliation indeed. She often displayed jealousy and pettiness, which I believe came about because of her desire to make herself appear to be more important than she was. She spent much of her time keeping up the appearance that she hailed from wealthy, titled landowners. She was always driving around with skis on her car.

Tomorrow, I’ll be posting the first chapter of Caroline Bingley for sample Sunday on Twitter. The book is still a work-in-progress, so the text may change a bit before its publication, but I’m very excited to share it with you. In the coming weeks and months, I’ll reveal the new cover and start taking pre-orders for paperbacks. In the meantime, don’t forget to check out Charlotte Collins and “Maria Lucas.”

Reputations are just history in rumor form. You can change it.

— 12 Dates of Christmas
We use cookies to ensure that we give you the best experience on our website. If you continue to use this site, we will assume that you are happy with it.OkPrivacy Policy