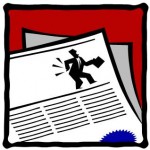 Yeah, I know. Insurance fraud sounds pretty dry. Can a novel that centers around this topic possibly be interesting, entertaining, sexy, and exciting? Well, I’m sure going to try to make Absolute Liability all those things.

Even though it sounds like insurance fraud is a white collar crime in which criminals do nothing more deceitful or thrilling than moving some numbers around a spreadsheet or claiming a bit more of a loss than they really experienced, this type of fraud can be a little more, well, animated.

Consider this true story from the Odditorium:

Body of evidence unburied. The plot seems right out of a ghoul novel…but Molly and Clayton Daniels dug up the grave of an elderly woman, dressed her in Clayton’s clothing, stuffed her body in their car and pushed the vehicle off a cliff. The Leander, Tex. couple wanted to collect $110,000 in life-insurance money, hoping the insurer would believe the charred body in the burned-out car was Clayton. Soon after the seemingly fatal crash, the dearly departed Clayton mysteriously reappeared as Molly’s new live-in boyfriend, one “Jake Gregg.” Clayton had died his hair and wore a new mustache. The couple even forged fake a birth certificate, high school transcript and driver license. But DNA testing of the elderly woman’s body helped prove “Jake” was Clayton. Molly received 20 years in prison, and Clayton at least 10 years.

That plan was just all sorts of wrong. Grave robbing, vehicle arson, faked death, false identities…well, that all adds up to an interesting story to me.

After that, we’d need some complex characters to investigate these wacky crimes and to interact with the oddballs who would concoct such ill-conceived schemes. Enter Julia Jackson, former cop turned fraud investigator.

Pretty soon, I’ll be releasing the first in my Julia Jackson short story series. Until then, check out an excerpt from Absolute Liability if you haven’t already. It’s still a work in progress, but you’ll start to get to know Julia a bit. I hope you’ll like her as much as I do.

Joy is the core of existence, the motive power of every living being…. It is the need of one’s body as it is the goal of one’s spirit.