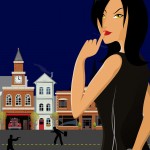 When I begin a new writing project, I make a mental list of aspects of the genre that I like and those that I don’t like. The beginning steps of writing Absolute Liability were no different. I wanted to make sure I included what I liked and avoided what I did not like because, believe it or not, sometimes our pet peeves end up gracing our own pages!

So here is the list I came up with for the Southern Fraud Series.

So what do you like and dislike in thrillers and mysteries? Do they match mine?

Whoever thinks of going to bed before twelve o’clock is a scoundrel.