Note: Dead Inside was originally published as a Snapstories serial novel on BectonLiterary.com. These unedited chapters remain available to read for free on the website. In the future, you will be able to purchase an edited, formatted ebook version of Dead Inside (exclusive to Becton Literary) to read more conveniently on your device. 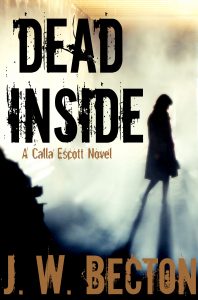 If you’ve read the first chapter of Dead Inside, my unpublished paranormal mystery, then you already know the basic premise of the mystery.

A victim of an apparent suicide is discovered in a locked (from the inside) house with a shotgun in his lap. But his brain, which has been ejected from his skull, is in the next room. On the other side of a wall.

How did the brain get there?

Katherine Ramsland described this unsolved (as far as I know) case in her keynote address at the Writers’ Police Academy in 2011. She asked the audience to ponder not only how the brain ended up in another room but how the death might have occurred. Was it a murder, a suicide, or an accident?

Unsurprisingly, none of us in attendance made any breakthroughs in the case, which has stumped police since it occurred (again, as far as I know). I don’t have many details about the actual case. If I knew anything–name, location, date–I’d enjoy delving into the real mystery myself.

Still, I couldn’t get this scenario out of my head, and in lieu of being able to provide a realistic answer to the conundrum, I wrote my own, paranormal version of what might have occurred.

Calla’s ambiguous death case in Dead Inside is inspired by the case in Ramsland’s speech. Her work as a forensic psychologist also informed Calla’s role in the book. I gave everything a paranormal spin that causes both the case and the profession to veer sharply from reality.

Read the Becton Literary online edition of Dead Inside FREE!

The Inspiration for Dead Inside

Evil is not something superhuman, it’s something less than human.

— Agatha Christie
We use cookies to ensure that we give you the best experience on our website. If you continue to use this site, we will assume that you are happy with it.OkPrivacy Policy