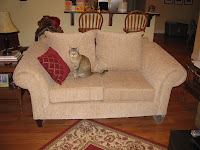 I said I’d never marry a man who didn’t have a full head of hair.
Did it. Love him.
I said I’d never water ski.
Did it. Liked it.
I said I’d never own a cat.
Own one. She’s helping with this blog even now, if holding me down in front of the computer by using me as her cat bed counts. (Her Royal Hiney is pictured annexing our new love seat.)
I said I’d never self-publish.
Doing it.
I am a serious writer, you know. Serious writers get agents and book deals with traditional publishers. And they don’t write Jane Austen sequels. They write novels that contain some “damning secret” that leads to  the deaths of at least fifty percent of their characters.
Well, I tried the literary novel route. In fact, I’m still trying it and have been since college. That was ten years ago! I had been stewing and hemming and hawing–yes, all three–for so long that I was paralyzed from over thinking it. My theory was that I needed to get the first draft out and then spend the time stewing and hemming and hawing during the editing phase. Otherwise, I would just end up with lots of incomplete novels.
So one day, I decided to sit down and write the first draft of a novel as quickly as possible. And I wanted to write something fun. And Charlotte Collins was the result. After about sixty days of writing, I had the first draft of a novel, and I thought it was pretty darn good. Why had I been able to produce this draft in sixty days and not been able to finish the other novel in ten years? Because I gave myself permission to screw it up completely. I was free to write anything, and I didn’t have to edit myself until later, if ever. (Don’t worry. I did edit it.)
I liked Charlotte Collins enough to give it to my mother-in-law, a Jane Austen fan, for Christmas, and being a relative, she is still required to like it, but being an in-law, she doesn’t have to like it that much. But she loved it. And my writer friend liked it well enough to recommend that I find an agent.
To shorten the sordid tale, the publishing world believed that Charlotte was too minor of a character to garner a following in the Jane Austen sequel market.
Why not?
Don’t you want to know what happened after Charlotte moved to Hunsford with that idiot Mr. Collins ?
And what happened to her sister Maria?
Did Charlotte ever get to experience the truth of love, or did she spend the rest of her life avoiding Mr. Collins and his raptures over the furnishings at Rosings Park?
Did Charlotte and Elizabeth return to the close friendship they shared before her marriage of convenience to Mr. Collins?

I wanted to know those things, so I wrote them. And now I’ve accepted the challenge to self-publish and sell 1,000 copies to prove that the market exists. Will everyone like it? Probably not. Will it leave you in tears or in awe of my literary prowess? Again, unlikely. But will it be a good escape? Heck, yes. Will it be fun and carry you to a bygone era of gentlemen, ladies, and country dances? Absolutely. It’ll look like this in your mind:

Doesn’t that look more interesting than cleaning the house or running errands?

So I’m going to share my awkward foray into the publishing world with anyone who will lay eyes on this blog. I’m sure it’ll be interesting to see how Charlotte Collins, a sequel to Jane Austen’s Pride and Prejudice will fare out there in the wide world.

Nothing so needs reforming as other people’s habits.