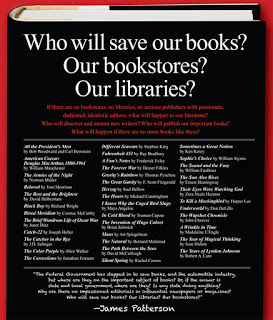 In case you didn’t know, Patterson comes down on the side of his publisher. Quelle surprise. In April 2013, he took out the above ad in the NYT. The best thing I can say about it is that at least he was intellectually honest. He took that ad out in PRINT, not on digital media. Apparently, he needed to reach more readers with his most recent opinion, so he used digital media. Hypocrite.

Amazon is involved in a commercial dispute with the book publisher Hachette , which owns Little, Brown, Grand Central Publishing, and other familiar imprints. These sorts of disputes happen all the time between companies and they are usually resolved in a corporate back room.

But in this case, Amazon has done something unusual. It has directly targeted Hachette’s authors in an effort to force their publisher to agree to its terms.

For the past several months, Amazon has been:

—Refusing to discount the prices of many of Hachette authors’ books.

—Slowing the delivery of thousands of Hachette authors’ books to Amazon customers, indicating that delivery will take as long as several weeks on most titles.

As writers–most of us not published by Hachette–we feel strongly that no bookseller should block the sale of books or otherwise prevent or discourage customers from ordering or receiving the books they want. It is not right for Amazon to single out a group of authors, who are not involved in the dispute, for selective retaliation. Moreover, by inconveniencing and misleading its own customers with unfair pricing and delayed delivery, Amazon is contradicting its own written promise to be “Earth’s most customer-centric company.”

Many of us have supported Amazon since it was a struggling start-up. Our books launched Amazon on the road to selling everything and becoming one of the world’s largest corporations. We have made Amazon many millions of dollars and over the years have contributed so much, free of charge, to the company by way of cooperation, joint promotions, reviews and blogs. This is no way to treat a business partner. Nor is it the right way to treat your friends. Without taking sides on the contractual dispute between Hachette and Amazon, we encourage Amazon in the strongest possible terms to stop harming the livelihood of the authors on whom it has built its business. None of us, neither readers nor authors, benefit when books are taken hostage. (We’re not alone in our plea: the opinion pages of both the New York Times and the Wall Street Journal, which rarely agree on anything, have roundly condemned Amazon’s corporate behavior.)

We call on Amazon to resolve its dispute with Hachette without further hurting authors and without blocking or otherwise delaying the sale of books to its customers.

We respectfully ask you, our loyal readers, to email Jeff Bezos, CEO and founder of Amazon, at jeff@amazon.com, and tell him what you think. He says he genuinely welcomes hearing from his customers and claims to read all emails at that account. We hope that, writers and readers together, we will be able to change his mind. (See the signatories here.)

One thought on “Patterson Opines; Konrath and Eisler Do Their Thing”

It’s not what you look at that matters, it’s what you see.

— Henry David Thoreau
We use cookies to ensure that we give you the best experience on our website. If you continue to use this site, we will assume that you are happy with it.OkPrivacy Policy