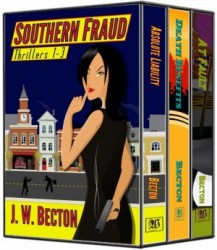 Get the first three books of the Southern Fraud Thriller series for one low price!

A woman is taken at gunpoint from the downtown office of Southeastern Insurance, and the police believe the victim is Special Agent Julia Jackson. Only it isn’t true.

Now, with the help of her new partner Mark Vincent, state fraud investigator Julia Jackson must find justice for the woman who was taken in her place.

As Vincent and Julia begin to unravel the multimillion-dollar frauds that led to the abduction, they encounter a cast of quirky characters, one of whom will go to desperate lengths to hide a deadly secret.

Things only become more dangerous as bodies begin accumulating around town, and Julia must discover the truth before the abductor comes to rectify his mistake.

Death Benefits (SF 2)
Fraud investigator Julia Jackson is back in action, and her next assignment throws her straight into the crosshairs of a bevy of desperate people…and one man who will do anything to keep his secret safe.

Late one night, a car burns on a lonely rural road, and the discovery of a body–charred beyond recognition–in the driver’s seat sets in motion a series of deadly events. And when the wife of the supposedly deceased driver demands her husband’s million-dollar life insurance policy payout before the autopsy can be completed, fraud investigators Julia Jackson and Mark Vincent must determine exactly how the victim died and at whose hands.

As Julia and Vincent interview witnesses and tangle with a host of angry suspects, another man is working behind the scenes to sever his mysterious connection to the body by any means necessary.

Soon Julia and Vincent realize they are not dealing with an average death benefits scam, but with a potential serial killer instead.

At Fault (SF 3)
Operating on an insider’s tip, Julia and Vincent must go undercover to infiltrate an organized fraud ring led by a cruel, manipulative boss. But the closer they come to identifying the size and scope of the organization, the more they realize that their source has withheld vital information, causing them to make errors in their investigation–errors that may have grave consequences for an innocent victim.

Meanwhile, Vincent and Julia must both confront mistakes from the past that could rise up to destroy their hopes for the future. Vincent’s tenuous relationship with his son is tested once again. And now that Julia’s search for her sister’s rapist has finally paid off, how will Tricia and the rest of the family react to the news that she has been hiding her investigation from them all?

Will Julia and Vincent unravel the fraud ring before someone innocent gets hurt? Will they be able to keep their families together? Will they cling to the belief that they have done right, or will they begin to see themselves as people At Fault?