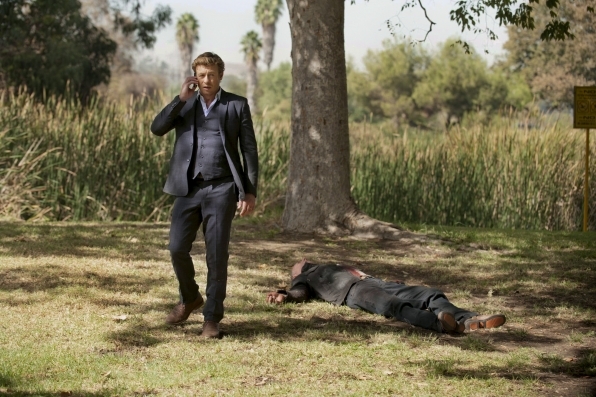 The Mentalist is one of my favorite TV shows, which is odd because I generally do not like Trickster characters. And Jane is a Trickster to his core. I chalk my interest up to Simon Baker’s acting and the mostly excellent writing on the show.

I’ve always believed that The Mentalist was about more than just Jane’s quest for vengeance against Red John. For Jane’s story to be complete, he had to complete his quest AND still overcome a bigger challenge. For the defeat of Red John to be complete, Jane, who was forced to hide his emotions for more than a decade to play a cat-and-mouse game with the serial killer, has to become a fully functioning human being again.

Okay, let me pause here to say that there will be spoilers for all of season 6. If you haven’t watched the whole season yet, stop here.

For a while there, it seemed like every show I watched featured a broken protagonist whose loss was so great that they could not seem to function fully in life. The writing seemed to indicate that the only way they would be happy was if they died so that their pain would end. Gibbs on NCIS mourned his family’s loss so much that he lived like a hermit (at least to the point of the show I watched), and House, well, he was just a mess. After reading an interview with Hugh Laurie in which he said viewers didn’t really want to see change in a main character, I stopped watching the show.

Change is what story is all about. Change is what life is all about. If the main character always stays the same, then what is the point? I’m not saying House had to put on a dress and skip through daisies; he could have gone the other way and become a criminal (like the Walter White in Breaking Bad). But for a story to be interesting, change has to occur or the character may as well just end it all. His life is already over anyway.

Patrick Jane contemplated suicide after his quest to kill Red John was over, but he chose to live.

That’s why I loved Jane’s crazy race to the airplane to profess his love to Lisbon. It was cheesy and corny, but it was also a good representation of Jane’s completely wild, out-of-control emotions. It was a contrived scene with a bunch of absurd obstacles, but the acting made it real.

Look at those faces. Those are not the faces of two actors whose primary concern is looking pretty on HDTV.

I leave out the parts that people skip.

— Elmore Leonard
We use cookies to ensure that we give you the best experience on our website. If you continue to use this site, we will assume that you are happy with it.OkPrivacy Policy