I hate to take issue with Nancy Kelley’s assertion that pie is the best food on the table for Thanksgiving. But I’m afraid I’m going to have to side with stuffing. 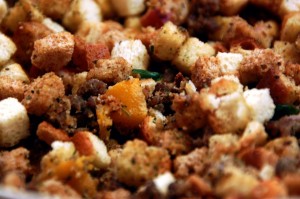 Stuffing is buttery and full of carbs. What’s not to love about butter and carbs? (As Melissa Buell pointed out, butter is an integral part of Thanksgiving.)

Plus, stuffing is surrounded by controversy. Controversy makes everything better, right?

According to the AJC, it comes down mostly to location: where the dish is cooked AND what region of the country the cook lives in.

That’s the way I also understand it. However, much like using the term Coke to refer to all soft drinks, Southerners apparently call it “dressing” no matter where it’s cooked, and Yankees call it “stuffing” whether it’s in the bird or not.

The debate also hinges partly on ingredients. In the North, stuffing is made of white bread, and in the South, dressing is made of cornbread. But again, this varies by region. Any bread-based dish cooked to serve alongside poultry is called by both words.

So really, stuffing and dressing are interchangeable, it seems, in most parts of the US. But why? Well, according the aforementioned article, Southerners objected to the harshness of the word “stuffing” and decided to call it by the more polite moniker “dressing.” 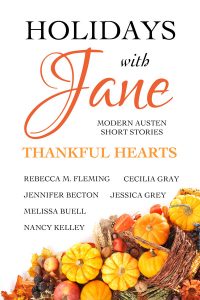 In my house, we eat stuffing, not dressing. It is always cooked inside the bird and made of white bread. But I imagine that Emma would serve the more politely named “dressing” for her feast in my Holidays with Jane: Thankful Hearts story, “Thanksgiving on Hartfield Street.”

But no matter how a politely named a side dish she serves, nothing will prevent the disaster Emma’s holiday weekend will become. In fact, her incessant meddling causes Addy (Harriet) to hatch her own cunning plan, which not only threatens to ruin the entire Thanksgiving celebration, but reveals the secret loves of both sisters’ hearts.

I hope your Thanksgiving includes both pie and stuffing and as little drama as possible.

5 thoughts on “Thanksgiving Throwdown: Stuffing vs Dressing (vs Pie)”

A man ought to read just as inclination leads him; for what he reads as a task will do him little good.