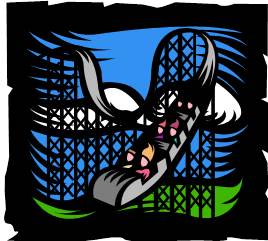 Riding the Learning Curve: before you can learn, you have to try.

When Moral Hazard came back from my awesome story editor, it became clear that I love the word “try.” I used it approximately a zillion times. That manuscript problem has since been remedied, but I still adore the word and the idea behind it.

to make an effort to do something : to attempt to accomplish or complete something

: to do or use (something) in order to see if it works or will be successful

: to do or use (something) in order to find out if you like it

For me, “try” encompasses the most important prerequisite of success. Before you can be successful at anything–whether that’s writing a novel, being a great parent, learning a new skill–you have to put in an effort, a real effort. Not just a half-assed attempt. Give it your whole ass. Put your whole ass into it!

It’s easy to think that if you don’t try, you can’t fail. And hey, that’s true. But if you don’t try, you can’t succeed either. And even if you really try and you don’t reach perfection right away, you haven’t failed. Maybe you tried NANOWRIMO and didn’t reach 50,000 words. So what?! You might have finished 25,000 words, and that’s 25,000 more words than you had before you tried. That’s a lot of words to build on. It’s also a great length for a novella.

Learning a new skill or taking on a major project requires more than one attempt to get right. You have to ride the learning curve. First, things are good, then they get worse, then they get better, and finally you get it right. But first you have to try!