I don’t know if anyone else has noticed this, but vampires are hot right now. Sookie Stackhouse novels by Charlaine Harris, True Blood (based on the aforementioned novels), Vampire Diaries (the book and the show), and a little juggernaut called Twilight. Don’t forget Anne Rice and Bram Stoker. Oh, and even Christopher Moore has a few vamps in his crazy, messed up world. And seemingly zillions of other vampires fill the bookshelves. These days you can drink your fill of vampy variety.

In fact, there is a P&P sequel called Mr. Darcy, Vampyre. I haven’t read it. (Or Sense and Sensibility and Sea Monsters or Pride and Prejudice and Zombies.) Sorry. I understand the appeal and think these offerings are hilarious ideas, but this type of crossover just isn’t my bag, baby. But with so much of the book market taken up by supernatural blood-suckers, maybe I should put a warning on Charlotte Collins: Vampires not included. 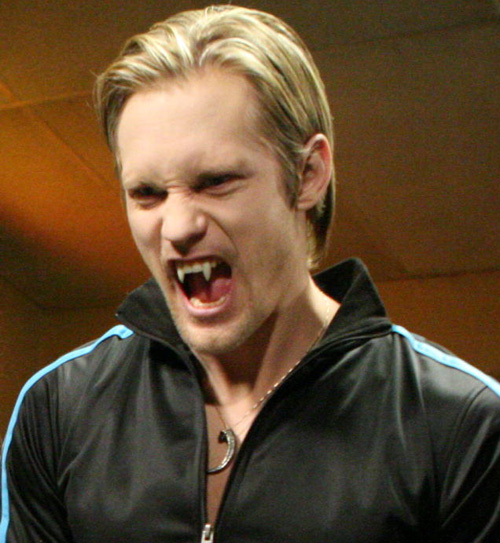 I get the fascination with vampires though. A vampire is the ultimate in unattainable bad boy. (Eric, pictured at left, from True Blood is my personal favorite. I like the track suit particularly.)

But I’ve often wondered if there isn’t something deeper about this vampire craze. (No, I’m not one of those who thinks that this vampire deal is tantamount to Satan worship. Quite the opposite actually.) I think there is something attractive about the eternal nature of the vampire, at least to me. It is human nature to strive for immortality. We have children “to carry on the family name,” we write books and blogs to try to make a lasting mark on the world, and we worry about food and exercise so that we can live as long as possible.

Vampires exist forever. But they are dead (and fictional). Humans may have a finite time on earth, but there is something eternal in our nature, and it is that which draws us to God (or the Ultimate Reality or whatever name you please). Humans are alive, experiencing all the joys and sorrows of life, but we are also creatures built for the eternal, for life after death. For heaven.

You’ll probably think I’ve gone off the deep end by comparing vampires to eternal life in heaven, but there you go. Agree or disagree, fine by me. It’s just something I’ve been pondering in this vampire-flooded market.

What do you think?

2 thoughts on “Vampires Not Included”

Bread may feed my body, but horses feed my soul.

— Unknown
We use cookies to ensure that we give you the best experience on our website. If you continue to use this site, we will assume that you are happy with it.OkPrivacy Policy