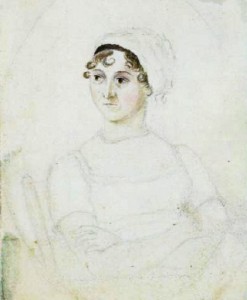 Kevin’s blog post below about J. R. R. Tolkien referred to what he did better than anyone else: world building. He created a land that felt large and ancient and alive. This artistic skill, along with many others, has made Tolkien’s work endure and flourish. And it caused me to ponder the same question about my literary idol: Jane Austen.

What did Jane Austen do better than anyone else? What has made her work as relevant today as it was 200 years ago?

I think Jane Austen was a master at character creation. She didn’t take herself so seriously that she devolved into unnecessary pathos or drama with her creations. Her characters were real then, and as such, they remain believable today. I’ve met Mrs. and Mr. Bennet. I’ve seen Darcys and Willoughbys. Charlotte and Caroline could be my neighbors. They are ordinary people without ridiculous traits or exaggerated flaws,  and Austen still perceived their value as literary characters.

Through them, Jane Austen showed us the largeness of a woman’s heart even though she was confined within the small world of her family, close friends, and home. She saw the drama of the smaller details and the value of a happy ending. What may at first appear to be a nice little love story is more of a fight for survival of both the woman herself and of her spirit.

What do you think Austen did best?

4 thoughts on “What Austen Did Best”

Courage is knowing what not to fear.

— Plato
We use cookies to ensure that we give you the best experience on our website. If you continue to use this site, we will assume that you are happy with it.OkPrivacy Policy