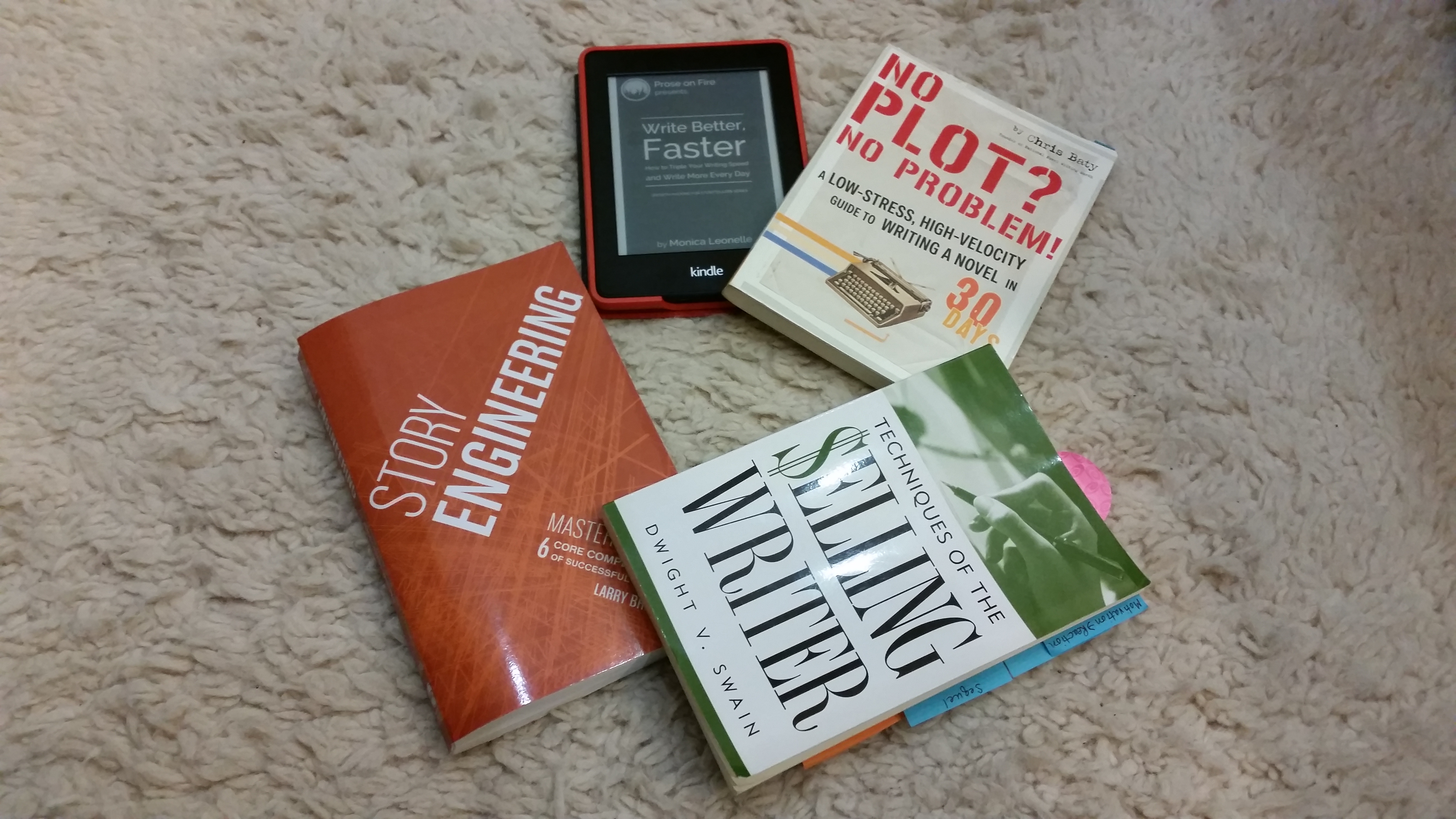 Two weeks ago, I wrote about my new writing process experiment, and I wanted to update and share a few books that have helped me along my writing journey.

Week 1: I wrote nearly 14,000 words in 5 days. This text consisted of outlining (Yes! Outlining! I outlined! More on that below.) and mass scene creation.

Weeks 2-3: I wrote 7 days out of 10 possible working days. (I went to the beach for 3.) During that time, I wrote 13,000 words. Most of this text was “additional text,” going back to clean up and improve existing scenes and add details. I did very little writing from scratch during these two weeks.

I am almost finished with the first draft of Shock Loss. With my experimental outlining technique, I feel as if I’m ahead of where I usually am at the same point in my previous process. I could be wrong. I’ll know more after my early readers and story editors get their hands on it, but I’m hopeful.

I’ve always been a pantser (articles on that here and here). Planning versus pantsing is really about how and when writers choose to free associate. Do you do it before you write or during your writing? No Plot? No Problem!: A Low-Stress, High-Velocity Guide to Writing a Novel in 30 Days

is valuable for writers who are trapped with perennially unfinished or even unstarted books. The writer suggests limiting planning to 2 weeks, but beyond that, there isn’t much direction on that subject. This book is more about motivating people to just do it. I’ve come to a point where I want more direction as I write.

I’ve always hated planning and outlining. I mean, I despised it. I know many writers who love it. They have character worksheets and plot worksheets and who knows what else. They write detailed character resumes and histories. They have note cards and folders and complex color-coded systems! When I look at many of these worksheets, I’m immediately turned off.

Here is what it boils down to: if I write it, I want to use it. (Which is ironically the same reason I want to start planning more. I don’t want to delete whole chapters if I can help it.) I don’t mean I just want to look back at a resume to help me understand what a character might do in a scene; I want to use the words I write in the final book. I don’t want a bunch of reference worksheets. They don’t make me feel like I am any closer to the character. In fact, to me, they feel disconnected.

Same problem with outlines. To me, outlines were these things that you wrote before a paper and then turned in for the teacher to see. The outline was supposed to provide a road map. But again, the actual words in the outline were never used in the final text of the paper. Though they influenced the direction of the paper, they were totally disconnected from the actual work itself.

Finally, someone–Monica Leonelle in Write Better, Faster: How To Triple Your Writing Speed and Write More Every Day (Growth Hacking For Storytellers #1)–has said something about outlining and planning that makes sense to me. Basically, it hinges on the concept of starting general and getting increasingly specific as you craft your story.

It begins with the basic 4-part story structure. (See Techniques of the Selling Writer

) To that structure, I added very general ideas about what each scene/chapter of each part should contain. This closely resembled an outline like the ones I wrote and ignored in my school days. However, instead of putting the whole outline on a separate piece of paper to look back at for reference, I actually used it in the text. Each point of the outline has its own section in Scrivener.

The idea is to begin with the outline text, which forms the basis of your finished text. In each subsequent draft, add details to the scenes/chapters, building slowly so that by the time you write a complete scene or chapter, you have actually thought through the entire book several times over. This gives you a chance to solidify your structure without sacrificing a lot of text or time.

I realize this doesn’t sound too far off from the traditional outline, but for me, it seems to be a game changer.

Read over your compositions, and where ever you meet with a passage which you think is particularly fine, strike it out.